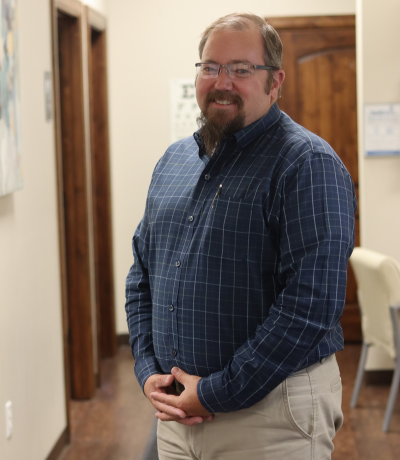 Dr. Scott Bontrager was born and raised in Blountstown, Florida, a small town in the Panhandle of the state. When he wasn’t in school, he spent his days working on his uncle’s dairy farm, hunting, and fishing. From the time he was a teenager, he dreamt of becoming a doctor. He took an unorthodox route to achieve his goal.

After graduating high school, he became a massage therapist then decided to complete his bachelor of science degree at Florida State University. He taught biology and chemistry at his local high school where he met his wife Jana who was also a teacher. He then decided to pursue his education further in Idaho State University’s Physician Assistant program in Pocatello. Moving from Florida to Idaho was quite a change for the Bontragers, but they have loved their new Northwestern home.

After practicing as a PA for five years, Dr. Bontrager decided it was time to fulfill his lifelong dream of becoming a doctor. He attended medical school at East Tennessee State University and was accepted to residency right back in Pocatello where is medical training had begun years earlier.

For years, Dr. Bontrager has enjoyed fishing in Preston’s many terrific reservoirs and is excited to be living here with his family. He and his wife have five children and one grandchild (so far). He and his family enjoy a variety of outdoor activities and have fallen in love with the Rocky Mountains where they are now proud to call home.